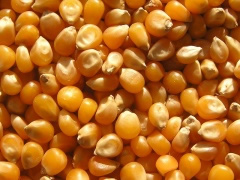 This table shows only a selection of the most important countries of origin and should not be thought of as exhaustive.

The kernel of maize has a pericarp of the fruit fused with the seed coat referred to as “caryopsis”, typical of the grasses, and the entire kernel is often referred to as the “seed”. The cob is close to a multiple fruit in structure, except that the individual fruits (the kernels) never fuse into a single mass. The grains are about the size of peas, and adhere in regular rows round a white, pithy substance, which forms the ear. An ear can commonly hold approx. 600 kernels and be approx. 180 mm in length. They are of various colors: blackish, bluish-gray, purple, green, red, white and yellow. When ground into flour, maize yields more flour, with much less bran, than wheat does. It lacks the protein gluten of wheat and, therefore, makes baked goods with poor rising capability.

A genetic variant that accumulates more sugar and less starch in the ear is consumed as a vegetable and is called sweet corn.

Contamination by moulds is mainly determined by the temperature of the grain and the availability of water and oxygen. Moulds can grow over a wide range of temperatures, but the rate of growth is lower with lower temperature and less water availability. The interaction between moisture and temperature is important.

Corn usually undergoes further post-ripening after harvesting during which moisture is expelled . In this condition, the cereal is very susceptible to mold and should not as yet be shipped overseas. However, as soon as the moisture content of the cereal is comparatively low (approx. 13 – 14%), adequate storage allows the sweat moisture to be absorbed by the air without the risk of mold growth. This sweating process continues for a period of approximately 1 – 2 months.

Corn is used for flour production and as a feedstuff. Starch, margarine and edible oil are also obtained from corn.

Corn which is “dry for shipment” may be kept for up to 12 months or longer. If the critical water content (approx. 13 – 14%) is exceeded, mold growth occurs. Corn with an excessive moisture content has a sour odor. Corn is usually shipped in bulk, rarely in bags.

Favorable travel temperature range: no lower limit – 20°C. Molds reach optimum activity at temperatures of between 20 and 30°C. In addition, at temperatures > 25°C, metabolic processes increase, leading to increased CO2 production and self-heating of the corn. If the cargo is transported in a hot, moist storage climate, there is a risk of premature germination. Maximum temperatures of 30°C are admissible for short periods.

Ventilation of cereals depends on water content: goods with a water content of < 14% and equilibrium moisture contents of < 70% do not need to be ventilated.

Up to a water content of 15%, surface ventilation is recommended, in order to dissipate CO2, heat and moisture. At the same time, care should be taken to ensure that the surfaces are not cooled too much, to avoid the formation of damp boundary layers beneath the cargo surface.

Corn releases water vapor constantly, which needs to be dissipated by ventilation. However, caution is advisable on voyages from hot to cold regions (e.g. Argentina to Europe):
Corn which is not dry for shipment has a particular tendency to self-heating and the flow of heat from the cargo counteracts external cooling, so resulting in the formation of steep temperature gradients in the superficial layers of the cargo. At the same time, water vapor flows from the inside of the cargo to the surface. In the case of simultaneous cooling of the surface by ventilation, the relative humidity increases in the superficial layers of the cargo. If dry fresh air is used for ventilation, a dry surface layer several centimeters thick is obtained, which creates the impression that the cargo is free of all defects. Beneath this is then a damp intermediate layer of lower grade cereal which is starting to decompose, being stuck together and swollen. Such damp intermediate layers are observed relatively frequently.

In order to avoid cargo damage caused by such moist intermediate layers, the fresh air supply must be restricted when there is an excessive temperature differential between the cargo and the external temperature. Damage to only a proportion of a cargo of corn is indicative of the damaged proportion having been stored in a dead air zone, where it was inadequately ventilated. Damage may also be caused by the ships’ lying in the roads at the port of destination for an extended period at low external temperatures. The cargo within the stack is, however, still at a higher temperature, resulting in water vapor transport towards the colder parts of the cargo close to the ship’s side, where moisture damage may then occur. Such damage is often associated with the fact that ventilation is stopped when the ship is lying in the roads. Ventilation is, however, essential until the cargo has been unloaded from the ship.

It is essential to be aware of the fact that it is impossible to ensure proper airing throughout a Bulk Cargo of cereals. Even when ventilation is carried out, the relative humidity of the immobile air between the individual cereal grains is determined by the product’s water content. For this reason, as mentioned above, drying-out caused by ventilation is generally only superficial. As a result, cereal loaded in an excessively moist state cannot be dried and protected from spoilage by a ship’s ventilation installation.

It is also a fact that heat cannot be removed from a bulk stow by ventilating the top surface. Corn (maize), like most grains, is a relatively poor conductor of heat and if deep in the bulk of the stow heat is present or being produced, only a small proportion will travel to the top and so be removed by surface ventilation. Only at the top of the stow will the temperature be that of the ventilating air. If the air of the interstices of the grain below the surface is warm and of high relative humidity, the effect of surface ventilation will be to cause condensation of the moisture in this air into the surface layer. This layer can then become caked and moldy to form a blanket, which will resist further removal of moisture and heat from below; and this sealing-in of heat will exacerbate the heating up process in the stow.

Looked upon from this point of view, ventilation is not to be recommended under any circumstances. For if the cargo below the surface is sound and of correct humidity it will remain sound and at much the same temperature as at loading. If the maize is damp and hot, ventilation – according to the usually accepted procedure – will produce a caked, wet, moldy surface layer and contribute nothing to the improvement in the condition of the bulk below.

It has been put forward many times that ventilation is always called for in any cargo, and that such ventilation should be continuous when the temperature of the air in the holds is more than 5°C higher than that outside; when there is a favorable differential in relative humidities and when weather conditions permit.

Obviously, if there is any headspace in the holds and the deck head is considerably colder than the cargo, then ‘distillation’ will occur and moisture will tend to be deposited on the metal work and slight ‘sweat’ falling on the cargo. Surface ventilation will assist in keeping this to a minimum. Such ventilation as is possible on board normal cargo vessels and bulk carriers can do little more than control the small amount of moisture inevitably arising from any bulked agricultural product properly dried and matured, when it is subject to air at lower temperature than the dewpoint of the interstitial air. If the agricultural product is not properly matured and dried, then ‘auto-destruction’ will commence and there is no means on the carrying vessel to deal effectively with the internal heat produced and with any moisture arising.

Surface ventilation cannot cope with much rising moisture and where heavy sweat damage of corn/maize cargoes has occurred, this is undoubtedly basically due to the moisture in the cargo being above the safe carrying level, and in point of fact is not ‘sweat’ in the above defined sense, but it is rising moisture actually condensed in the cooled surface of the maize.

As outlined previously, corn/maize at the correct moisture content can be carried successfully without any ventilation whatsoever. However, if the moisture content of the corn/maize is above the safe carrying level, then heating up will commence and damage be occasioned. But, without ventilation, the damage will be slightly different – there being less mold and sweat damage and more fermentation effect. If there is an overstow of bags, then the rising moisture tends to condense on them and become moldy.

The above considerations may be expressed thus. If the moisture content of the maize at loading is above the safe carrying limit and the conditions for heating up are favorable, then with or without ventilation damage will occur in the stow. If the cargo is ventilated, then the top of the stow will become caked, moldy and sweat damaged, with some fermentation below in the stow. If ventilation is not carried out, then the pattern of damage will be different – there being less surface caking and moldiness and more fermentation throughout the mass.