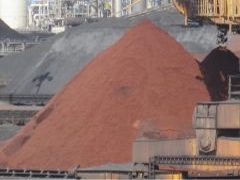 Varying largely; several iron ore products are classified as heavy bulk cargo, which means that due to their dense structure overstressing of tank tops or ship’s structures can occur in case improperly loaded and or distributed over a ships hold.

Iron Ore (fines)
Iron ores are rocks and minerals from which metallic iron can be economically extracted. The ores are usually rich in iron oxides and vary in colour from dark grey, bright yellow, deep purple, to rusty red. The iron itself is usually found in the form of magnetite (Fe3O4), hematite (Fe2O3), goethite (FeO(OH)), limonite (FeO(OH).n(H2O)) or siderite (FeCO3).

Ores carrying very high quantities of hematite or magnetite (greater than ~60% iron) are known as “natural ore” or “direct shipping ore”, meaning they can be fed directly into iron-making blast furnaces. Most reserves of such ore have now been depleted. Iron ore is the raw material used to make Pig Iron, which is one of the main raw materials to make steel. 98% of the mined iron ore is used to make steel. Indeed, it has been argued that iron ore is “more integral to the global economy than any other commodity, except perhaps oil”.

Iron ore is mined in about 50 countries. The seven largest of these producing countries account for about three-quarters of total world production. Among the largest iron ore producing nations are Russia, Brazil, China, Australia, India and the USA.

Iron is one of the three naturally magnetic elements; the others are cobalt and nickel. Iron is the most magnetic of the three.

The principle ores of iron are Hematite, (70% iron) and Magnetite, (72% iron). Taconite is a low-grade iron ore, containing up to 30% Magnetite and Hematite.

The carriage of most iron ore products in bulk form is subject to the provisions of the International Maritime Solid Bulk Cargoes Code (IMSBC-Code).

The code requires the shipper of such bulk cargoes to issue a cargo declaration to the carrier. Such a cargo declaration should include the appropriate information to enable the carrier to take the necessary precautions for proper stowage and carriage of the cargo concerned. A standard form for this information has been developed and the IMSBC-code should be consulted for the further details and particulars of such a form.

Liquefaction is one of the main risks when carrying iron ore and in particular iron ore fines. Cargoes that are liable to liquefaction are classified in the IMSBC-code as group A cargoes.

‘Fines’ is a general term used to indicate the physical form of a mineral or similar cargo and, as the name suggests, such cargoes include a large proportion of small particles.

In a dry, granular, well-trimmed cargo the individual particles are in contact with each other such that frictional forces prevent them sliding over one another. However, if there is enough moisture present then there is the potential for the cargo to behave like a liquid. This is because settling of the cargo occurs under the influences of vibration and the motion of the ship. As such, the spaces between the particles reduce in size with an accompanying increase in water pressure between the particles. This results in a reduction in friction between the particles and can allow the cargo to shift suddenly.

The tendency of liquefaction depends largely on the moisture content and its relation to the flow moisture point (FMP). A further relevant term is the cargoes transportable moisture limit (TML). The TML is defined as being 90% of the cargoes FMP and thus incorporates a safety margin of 10% of the FMP for safe carriage on board ships.

The IMSBC-code requires that the shippers ensure that the cargo is properly sampled and tested so the determine the moisture content, the FMP and TML before it is loaded. Relevant certificates stating the sampling protocols and outcome of laboratory tests on moisture content, FMP and TML should be provided by the shipper prior to loading. The IMSBC-code should be consulted for relevant sampling and test procedures.

Only if the cargo has a moisture content that is less than the TML can it be offered for safe carriage by sea. Masters should be vigilant and ensure that cargo is inspected for any signs that the moisture content may be above the TML. For example, free standing surface water, or spattering of cargo as it lands in the holds with resulting run marks are clear warning signs.

The IMSBC Code states that a Master may undertake his own check test, often referred to as the ‘can test’. If he considers that the cargo may not be as dry as is being claimed then he can adopt a complementary test procedure.

The test is to check for approximately determining the possibility of flow on board ship or at the dockside by the following auxiliary method: Half fill a cylindrical can or similar container (0,5 to 1,0 litre capacity) with a sample of the material. Take the can in one hand and bring it down sharply to strike a hard surface such as a solid table from a height of about 0,2 m. Repeat the procedure 25 times at one-or-two-second intervals. Examine the surface for free moisture or fluid conditions. If free moisture or a fluid condition appears, arrangements should be made to have additional laboratory tests conducted on the material before it is accepted for loading. “It is worthy of note that if the result of the ‘can test’ is negative (i.e. in case no free moisture of fluid is observed after the can test) this is not proof that the cargo is below the TML.

Summary Advice for Masters
Follow the IMSBC Code requirements in relation to Class A cargoes.