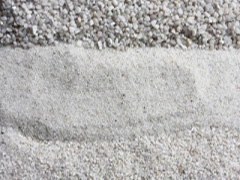 The chemical compound silicon dioxide, also known as silica, is an oxide of silicon with the chemical formula SiO2. It has been known for its hardness since antiquity. Silica is most commonly found in nature as sand or quartz, as well as in the cell walls of diatoms.

Silica is used primarily in the production of glass for windows, drinking glasses, beverage bottles, and many other uses. The majority of optical fibres for telecommunications are also made from silica. It is a primary raw material for many whiteware ceramics such as earthenware, stoneware, porcelain, as well as industrial Portland cement.

Silica is a common additive in the production of foods, where it is used primarily as a flow agent in powdered foods, or to absorb water in hygroscopic applications. It is the primary component of diatomaceous earth which has many uses ranging from filtration to insect control. It is also the primary component of rice husk ash which is used, for example, in filtration and cement manufacturing.

Thin films of silica grown on silicon wafers via thermal oxidation methods can be quite beneficial in microelectronics,where they act as electric insulators with high chemical stability.In electrical applications, it can protect the silicon, store charge, block current, and even act as a controlled pathway to limit current flow.

A silica-based aerogel was used in the Stardust spacecraft to collect extraterrestrial particles. Silica is also used in the extraction of DNA and RNA due to its ability to bind to the nucleic acids under the presence of chaotropes. As hydrophobic silica it is used as a defoamer component. In hydrated form, it is used in toothpaste as a hard abrasive to remove tooth plaque.

In its capacity as a refractory, it is useful in fibre form as a high-temperature thermal protection fabric. In cosmetics, it is useful for its light-diffusing properties and natural absorbency. Colloidal silica is used as a wine and juice fining agent. In pharmaceutical products, silica aids powder flow when tablets are formed. Finally, it is used as a thermal enhancement compound in ground source heat pump industry.

Toxic by inhalation, chronic exposure to dust may cause silicosis.

Silica sand is one of the most common varieties of sand found in the world. It is used for a wide range of applications, and can be purchased from various suppliers throughout the world. Silica sand is used in industrial processing, to make glass, as fill, and to create molds and castings.

Sand is the general term for broken down granules of minerals or rocks, technically between about one-sixteenth of a millimeter to two millimeters in diameter, falling between silt and gravel in the spectrum of sizes. There are many varieties of sand in the world, each with their own unique composition and qualities. The white sandy beaches of iconic tropical destinations, for example, are made up primarily of limestone that has been broken down, while many black sands are either volcanic in origin or contain magnetite. Other sands have high levels of iron in them, and so are rich and yellow in colour.

The most common mineral in the Earth’s continental crust is quartz, and most silica sand is made up of broken down quartz crystals. Silica is another name for silicon dioxide, SiO2, of which quartz is a specific latticed structure. So silica sand is quartz that over the years, through the work of water and wind, has been broken down into tiny granules. These granules can be used for many different purposes, and can be found in most non-tropical regions of the world.

Silica sand is used throughout the world, and in so many different ways it is hard to imagine a world without it. From water filtration, to glass manufacture, to industrial casting, to sand blasting, to producing concrete, to adding texture to slick roads, silica sand impacts every aspect of daily life. Many industrial suppliers carry silica sand in bulk quantities, while some smaller household stores sell it in smaller amounts for home or home construction use. One of the major uses of silica sand in the modern world is as an ingredient in industrial concrete. Silica sand produces the bulk of a great deal of concrete, although some concrete bypasses its use for safety and strength reasons.

Because of the fine grains involved in silica sand, it can present a health risk if not properly handled. In projects where products containing silica sand are being cut or pounded, such as demolition projects involving concrete, or sandblasting operations, care must be taken to keep the silica sand out of the lungs. Failure to wear a respirator or mask can result in lung irritation, and prolonged exposure can cause a chronic condition known as silicosis. Silicosis has no ready treatment, and can cause severe pain or death. Additionally, silicosis increases the likelihood of secondary infections, such as tuberculosis, and has been linked to an increased incidence of lung cancer. As a result, all materials containing more than 0.1% of silica sand must be clearly labeled, and workplace health codes apply.

Shipped in (big) bags or in bulk.

Although silica sand is not hazardous considering its granulometry, any respirable crystalline silica generated by processing silica sand may cause health effects. Prolonged and/or massive inhalation of respirable crystalline silica dust may cause lung fibrosis, commonly referred to as silicosis. Principal symptoms of silicosis are cough and breathlessness. Exposure to dust should be monitored and manage