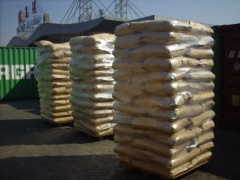 Sodium bicarbonate or sodium hydrogen carbonate is the chemical compound with the formula NaHCO3. Sodium bicarbonate is a white solid that is crystalline but often appears as a fine powder. It has a slightly salty, alkaline taste resembling that of washing soda (sodium carbonate). The natural mineral form is nahcolite. It is a component of the mineral natron and is found dissolved in many mineral springs. It is among the food additives encoded by European Union, identified by the initials E 500. Since it has long been known and is widely used, the salt has many related names such as baking soda, bread soda, cooking soda, and bicarbonate of soda. In colloquial usage, its name is shortened to sodium bicarb, bicarb soda, or simply bicarb.

NaHCO3 is mainly prepared by the Solvay process, which is the reaction of sodium chloride, ammonia, and carbon dioxide in water. Calcium carbonate is used as the source of CO2 and the resultant calcium oxide is used to recover the ammonia from the ammonium chloride. The product shows a low purity (75 %). Pure product is obtained from sodium carbonate, water and carbon dioxide.

Sodium bicarbonate is not listed as a dangerous cargo. Consult the applicable MSDS sheet on transport advice etc.